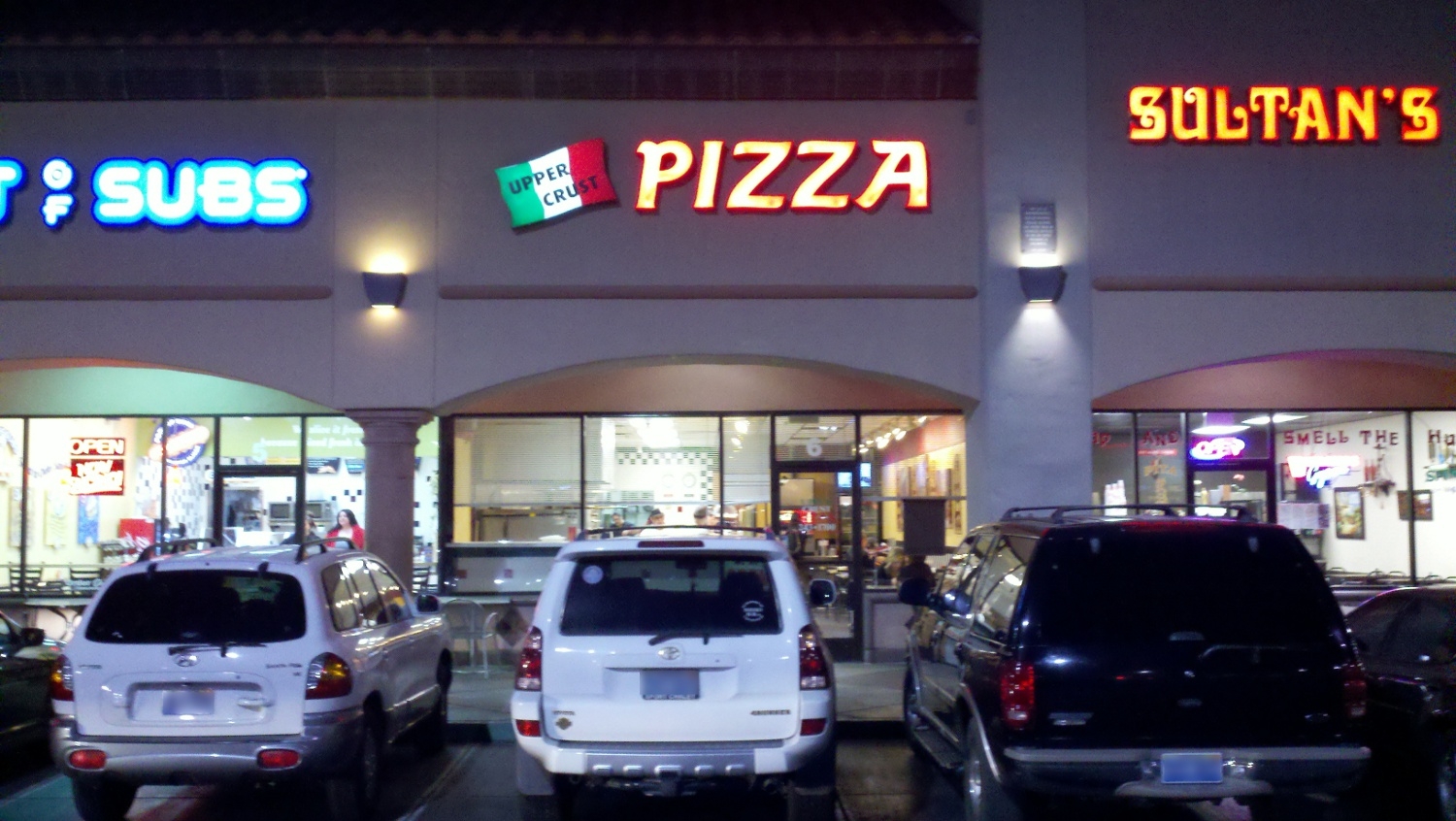 Upper crust pizza is located in the Vons shopping plaza near chronic tacos. As I pull in front of the store front, I see a car parked out front with several bumper stickers of Boston sports teams, which I’m guessing is the owner’s car. Immediately gives me the feeling I am in the right place. Maybe this will be real East coast pizza after all. Walking inside the place is busier than any other non-restaurant pizza place I’ve been to off the strip. I see the slice pizza behind the glass and it looks good–I’m excited.

The woman at the counter is exasperated presumably because it’s a busy night. There’s a guy behind the counter whom I’m assuming is the manager/owner who seems pretty attentive to everything that’s going on in the shop; he’s getting dine-in customer’s finished with their meals takeout boxes, opening the door for people, and just in general seems very hands-on with what’s going on in the business. That’s a good sign. Someone who cares. Often the problem with the chain restaurants is that the people working there, while possibly being very good workers, just aren’t going to care like someone who’s got their heart and soul in a business. How do you franchise heart? There are chains who do a great job such as Grimaldi’s but those seem to be the exception.

Getting home I grab a slice of cheese. It’s good. Really good. The sauce and cheese combine and have subtle butteriness to them that is divine. The flop of the pizza is the best out of all the pizza I’ve tried in Las Vegas. You hold a slice and it droops beautifully down and if you shake the slice, the tip flops back and forth like a wet noodle.

Flop of slice of pizza from Upper Crust Pizza

The pizza crust has a just the right amount of char on it:

I have a slice of pepperoni next which is also delicious. In a rare occurrence I actually enjoy the plain cheese slice more than the pepperoni. The cheese is that good that just it doesn’t need anything added to it.

Another great thing about this place is you get currently get a large cheese pizza for $10 with an online coupon on their website. This is one of my new favorites of Las Vegas and definitely some of the best pizza in Las Vegas. I’m adding it to our official list of the best pizza places in Las Vegas