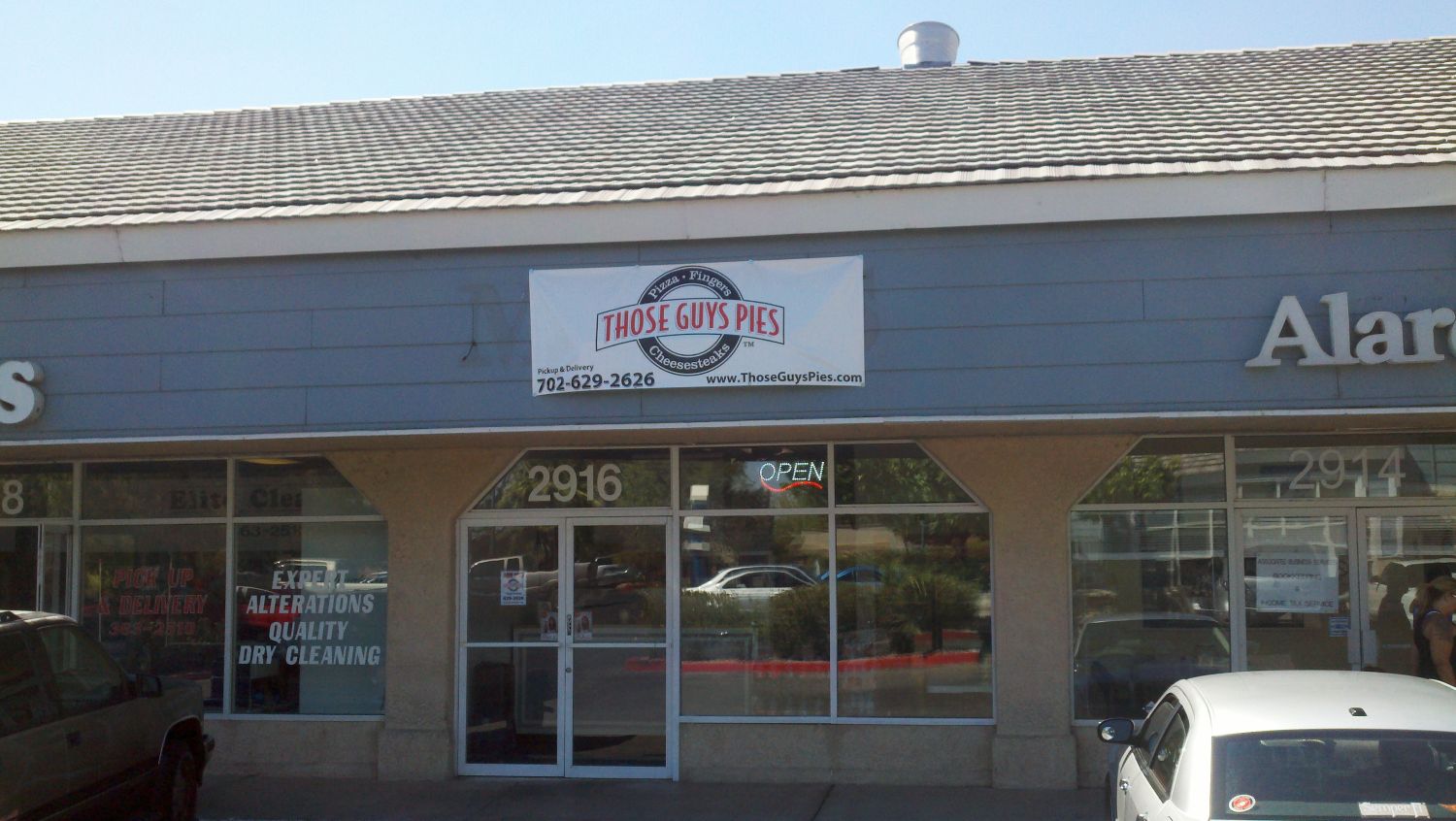 A new pizza joint recently opened in Las Vegas in late August 2012. It’s called Those Guys Pies and it’s located in the Lakes by Sahara and Durango.

It takes the place of Milanos Pizzeria II which used to be at the same location. I never tried Milanos, but Those Guys looks promising. Apparently it’s run by some experienced restaurateurs one of whom had a hand in the wildly popular Hidden Pizzeria at the Cosmopolitan. That sets the bar pretty high but it would be great to not have to go to the strip get that quality of pizza. Vegas keeps upping the pizza game. So many new pizza places are cropping up; seems like there is a new one every couple months. Exciting times for pizza lovers in Las Vegas!

I’d been interested to try this place ever since I heard it had ties with the Secret Pizzeria at the Cosmopolitan. Those Guys Pies was created by Roy Bass, Colin O’Leary and Sean B. Apparently Roy Bass was involved with the Pizzeria at the Cosmo. Those Guys Pies takes literally the opposite approach that Dom DeMarco’s did. While Dom DeMarco’s went full-on restaurant style with hostesses, plasma TV’s, and a large outdoor patio, Those Guys is more the hole in the wall pizza joint. They do not have a proper sign yet, a banner hangs in it’s place and I think they have one table. It’s definitely a takeout or delivery only sort of place.

I order a large pepperoni pizza which costs $18. Those Guys Pies are slightly more expensive than your typical neighborhood pizza joint but they are on par with places like Biaggio’s or Dom DeMarco’s. I open the box and the first thing I notice is that they have the large style pepperonis similar to the Pizzeria at the Cosmopolitan, which, as good as the pizza at the Cosmo is, I found to be rather bland. My first thought is I should have ordered a different topping.

Pepperoni pizza from Those Guys Pies

I take out a slice and it has a beautiful flop. This here is folding pizza folks.

Flop of slice of pizza from Those Guys Pies

In fact even with folding, the slice still tries to take a nose dive. I take a bite and it’s good. Really good. The cheese is delicious. Much to my relief the pepperonis are not bland at all but savory just like you expect them to be. The crust is good and has a great consistency. Unlike the crust at the Cosmopolitan pizzeria which can sometimes be overly crispy (although I’ve never orderd a full pie from the Cosmo only reheated slices so that could be it) this is soft and slightly chewy.

Bottom of crust of pizza from Those Guys Pies

Overall it’s amazing pizza, some of the best I’ve had in Vegas. I’ve officially added Those Guys Pies to our list of the best pizza places in Las Vegas.