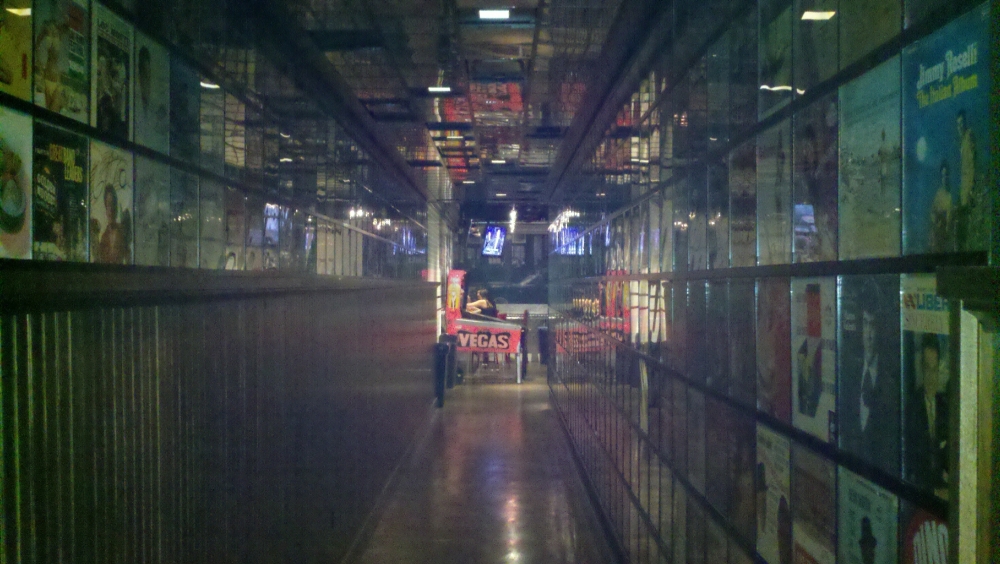 I think I came across this place on Yelp and, at the time, it had almost like 300 positive reviews and I’m asking myself why the hell I haven’t heard of this place. Decide to check it out last night. Well parking is a bitch at the Cosmopolitan; after waiting in traffic for 20 minutes just to turn into the Cosmopolitan the self-park was completely full and literally blocked off and the valet was only accepting hotel guest with room keys. Do I come back another night? No, now I was determined to try this pizza. Parked at the Vdara and hoofed it over to the Cosmo.

The place is a little hidden. Basically go like you’re headed to Marquee nightclub. From the valet entrance near registration you walk straight back to the other end of the casino near the Chandelier bar (the bar that looks like a big chandelier). Go up the escalator, now your on the second floor by Marquee, go up one more escalator to the third floor. Now your at the third floor and there are a couple of restaurants up there. From the top of the escalator head straight and slightly to the left. Between two restaurants there is a long hallway with no sign. You can see a couple of arcade games/pinball machines at the end of the hallway and the hallway is lined with a ton of framed photos. Go down the hallway and you’re there. Apparently the place has no name, my receipt just said “Pizzeria”.

The pizza behind the counter looks pretty good. Ordered a slice of cheese, two slices of pepperoni, and a slice of pepperoni with peperoncini. The slices start a $3.50 for a slice of cheese and additional toppings are 0.50 each. Service was pretty fast and they warm the slices for you. You can also order a whole pie which cost around $24 and takes about 30 minutes.

Dive into my cheese slice and it’s really good. The slices are thin and they have that New York pizza flop. The pepperoni is good too. The actual pepperoni it self is not my favorite kind it’s big and not quite as greasy and savory as I’d like but still good. The dough is a tiny bit chewy but I think with a fresh pie it would be better. I’m in heaven. This is absolutely some of the best pizza you can get it a hotel on the strip, much better than Sirroco’s in New York New York. It’s official, this place qualifies as some of the best pizza in Las Vegas. Go there.